Sunday was a powerful day in many ways. I got to visit a great friend of mine who has been ill lately. I had been in phone contact with her while she was sick, but we hadn’t visited much. This allowed her to get rest and me not to catch her bug.  After some chat, we went and got a pizza. After we ate and chatted some more, she decided to wash her hands and take a look at my Blue Arcturian sculpture I got from Cynthia Crawford in December 2011. When she first held the sculpture in December, her Reiki came on and the sculpture began to take Reiki. She was amazed as nothing like this had happened to her before. She had never had something inanimate accept Reiki in the past.The first night I had the beautiful sculpture, I had an uncommon experience: A bomb of gold lightning (or at least that’s what I’m calling it) went off inside my head. It was quite explosive and beautiful.

While she held the sculpture Sunday, she started to laugh some. She saw me with a young Arcturian child on the floor playing. He was teaching me how to levitate and float objects around. I was a toddler when he first came to see me. An adult was in the back ground, but was somewhat cloaked and didn’t stand out too much.  On one of his visits, his eyes had changed from a brownish color. When I noticed his eyes had made some sort of transition, he did a little dance and was very happy. They were now a yellowish color. This was some milestone for him in his own evolution. He would come at night when my parents were asleep and the both of us would have a light source around us provided by him. She saw him come with a ‘parent’ until he was approximately nine years old at which point he was advanced enough to visit me on his own.  She said he had been around and watching and providing certain protections most of my life.  I asked my father, a year ago, if there was anything strange about my childhood. I was trying to find out what age my contact with other life forms had started. He said I didn’t appear to act strange to him, but I would be awake all night and talking to somebody as a toddler and child. He told me he or my mom would have to get up a few times a week and put me to get back into bed. They weren’t mad at me, but they didn’t know who I was  interacting with;  I know exactly who I was interacting with now.

One of the biggest hurdles many people who’ve suffered in the black projects will tell you is getting over painful abandonment issues. The disconnect from society and Providence is excruciating . To know my young Arcturian friend was there for me and at least came to play and comfort me, brought tears to my eyes. Last night, while enjoying a hot salt bath, I closed my eyes and saw him. He was unique looking and I can only surmise he was the equivalent to eight or nine in human 3d  years.

I’m sad to report and a little angry too, my abductions have not stopped. It appears that more than one group is abducting me and implant wars are going on. My Reiki attunements did some damage to my cranial implant. There was an issue with my left bicep implant as a result. That left bicep implant was blown out as it was causing extreme interference with my life. Imagine your bicep quivering, violently at times, all day and all night.  Recently, I had two new implants placed into my spine and another new one in the back of my skull.  Last night, I relived, to a small extend, the surgery. I felt several pokes, like needles sticks in in my back and towards my left scapula. They needle sticks hurt, but it wasn’t the worst pain I’ve ever dealt with.  Two implants about the length of long grain rice were  inserted deep into my back  muscles. There were two men who escorted me into a room and a young female doctor that did the procedure.  This was a military operation of some sort. The next implant in my brain is E.T. in nature or far as we can tell it is. It is very sophisticated. They shaved a cube into the back of my head and did the procedure. There was a scab that took a month to fall off.   My friend believes that somebody benevolent put the cranial implant in as an over-ride to the other implants that were installed. I feel like a slave just thinking about this. Around midnight last evening, I heard the implant in my brain for a few minutes. It produced a myriad of low frequency hums with some high frequency digitized sounds.  My neck and upper spine have been sore and inflamed for a while and now I know why.  The massage therapist said on Friday there was a magnetic energy  in my cervical spine when she was massaging that area. It was on Sunday at my friend’s house we discovered the implants were there. My friend has had two implants removed this year. Her ear implant was removed in January and last month a cranial implant was removed. She was scheduled for an MRI, so somebody was looking out for her.  Even after I’ve broke my contracts with the military industrial complex and satanic organizations, they still abduct me. I’m certain this is going to get worse before it gets better.  It’s demoralizing.

Just after I washed my hands to do Reiki on my friend, she and I, at almost the exact moment, felt we were being monitored. When I put my hands on her, I got an electrical sensation over the right side of my face and even through my eye that lasted most of the time I did Reiki on her. She  saw a man in a white van with an ear piece in and he was listening to us. He was somewhat thin and had wire framed glasses on. We were definitely being monitored. This was nothing new to either of us.  Next, she saw me around six years old being taken into a room with a group of boys my age. We were all in dark green clothes and they were thick and somewhat industrial looking. There were adults in the room,including the man doing surveillance on us Sunday, but they did not interact with us.  She said this man was in his twenties and was there in the room with me and the other boys when I was a little guy. He may very well have been assigned to monitor me my entire life. She said it was definitely him in the van listening thirty years later. Again, I feel enslaved.  This shit is too much to handle as an adult! I can’t even imagine what It was like as a child. I asked my friend if the clothing seemed military in nature or something else. She said it reminded her of prison. She got the vibe we were being treated, all the boys, as prisoners. What a fucked up world we live in.

These are made by Cynthia Crawford and the photo below is an example of an Arcturian. This is the Arcturian plaque. 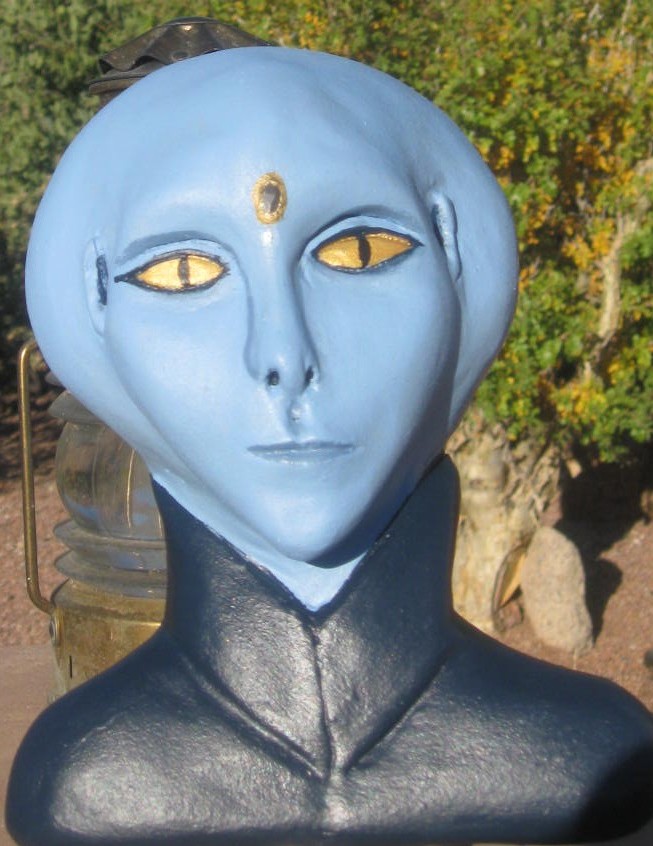 To military intelligence groups  and the  CIA, NSA,  et all:

I was told I could go “home” in 2009, but I would have to make the decision. I took some time to think and work through my feelings. I choose to stay and fight. I told the mighty presence who came to me that I wanted to go, but I felt so strongly that I have to take a role in the “main event” coming to this planet very soon. I felt awful for humanity and  I couldn’t leave.  With that being said, listen carefully! I’M IN THIS! I’m not backing down, I’m not negotiating, and I’m not surrendering. Abductions, surveillance and all the other bullshit that is going on, will not stop me.  I will continue my blog and to speak out about the vile acts being done to children and the rest of humanity. I will continue until I’m dead or I have succeeded, whichever comes first.